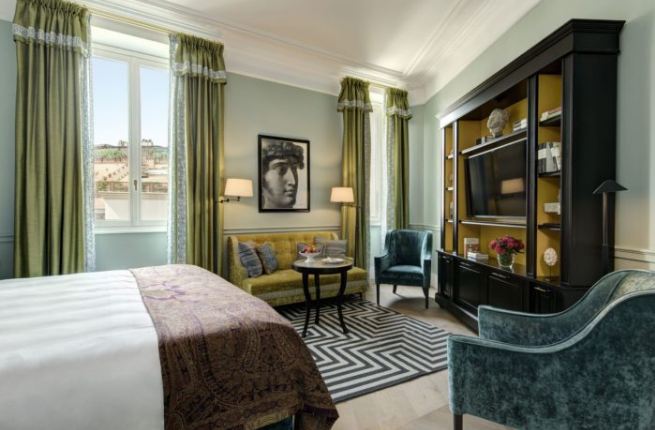 From 17 thousand to more than 200 thousand pesos it can cost a night at Hotel de la Ville, located in the historic center of Rome.

Enrique Peña Nieto was caught leaving a hotel in the center of Rome , Italy, in the company of his girlfriend, the model Tania Ruiz.

The cost of one night at the Hotel de la Ville varies according to the needs of the guest: from 17,390 pesos you get a “superior” room for 2 people, with a bed in 28 square meters; up to a 103 square meter suite, with panoramic views, at a cost of 227 thousand 804 pesos .

There is the “Deluxe” option (photo below), at 23,503 pesos per night, with taxes and fees included.

While an executive suite, with 58 square meters, reaches 44,971 pesos:

If this last suite has a terrace, the cost increases to 59 thousand 188. But if in addition to a terrace it has a panoramic view, it rises to 104 thousand 683 pesos .

The most expensive suite reaches 227 thousand 804 pesos per night:

The Hotel de la Ville is located in the historic center of Rome .

Through social networks, videos were shared where the former president is observed, leaving said hotel , and boarding a taxi, when a group of people brand him as a “thief.”

The first video shows the former governor of Mexico, while apparently hiding behind the hotel wall.

“He was standing waiting for his taxi when I recognized him and he no longer knew (sic) how to hide… he only stuck his head out to look at me that I told all the people that he was the former president of Mexico and that he is a thief. # EnriquePeñaNieto @gabyserrar ”, is the text that accompanies the video of the user @ karenytv3 on Twitter.

When leaving the hotel and boarding the taxi together with his partner, the woman who is filming the scenes, yells at him: ‘ thief ‘!